The Ratio desk enables a smooth transition between sitting and standing allowing users to vary their posture as needed. 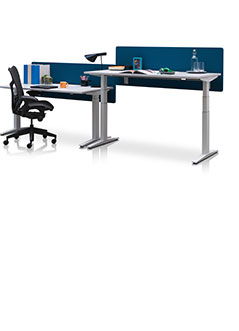 Research shows that moving from one posture to another is beneficial to our health-people who move more, feel better. And people who feel better, work better.

The average worker spends between three and eight hours a day at their desk, with many of us spending more time sitting down than sleeping.

Research shows links between sedentary lifestyles and an increased risk of diabetes, obesity, heart disease and some kinds of cancer. 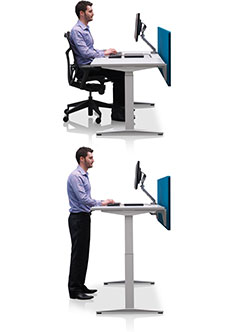 Standing for short periods increases blood flow, burns extra calories, and increases our metabolism. Extended standing can lead to increased risk of back pain and fatigue, so it`s best to switch positions during the day.

Height-adjustable furniture can reduce sitting times by up to 60 percent, and by alternating between sitting and standing our bodies are healthier. 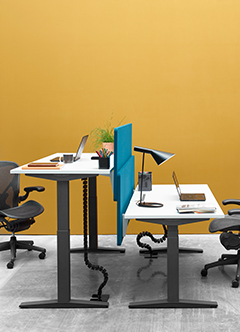 With its clean lines and lightweight, uncluttered design, Ratio has been designed to blend into the modern office landscape.

Ratio encourages users to move and change their posture throughout the working day. It is available with two kinds of electric height adjustment, including programmable pre-sets for use at assigned desks; this means a user can adjust their desk to exactly the right height for them at the touch of a button. Manual height adjustment is also available. 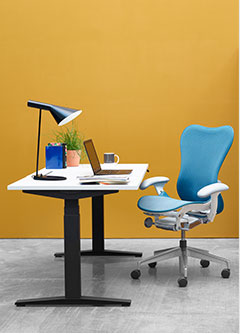 There are a number of different screen options for Ratio, depending on the configuration of the work space. When used in a standalone format, the screen is optional; if included, the screen moves up and down simultaneously to afford the user additional privacy. In a back-to-back formation, the screen remains in a fixed position between the two desks. 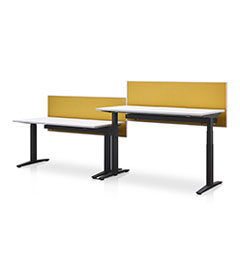 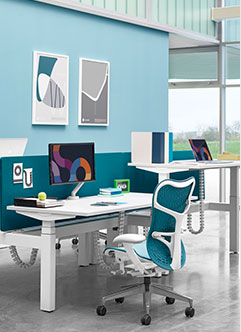 Ratio works seamlessly with our other products, from other desking and storage systems to task chairs and complementary side tables, to create a dynamic work environment where movement throughout the day is intuitive.

Ratio`s design ensures that ergonomic tools such as Flo monitor arms are fully supported. This enables the user to easily modify the position of one or more screens when adjusting their own posture. 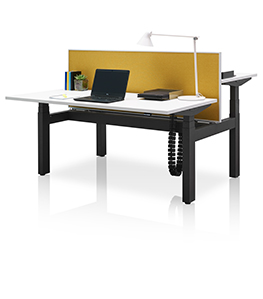 Design Heritage: A Story Continued
Herman Miller has always believed in the importance of supporting a variety of postures and encouraging healthy movement while you work. An alternative to sitting down at the desk is woven into our design history. In the 1960`s both Robert Propst and George Nelson pioneered the concept of alternative working positions.

Propst, the creator of Action Office, the world`s first open-plan office system, designed a hybrid of a stool and chair he termed a `perch`. Nelson, who was appointed Design Director in 1947, enjoyed standing around at work and thought others might also, designed a stand-up, roll top desk for the Action Office line. Both designers recognised the benefits of standing whilst working, long before the term `ergonomics` was widely known or understood. 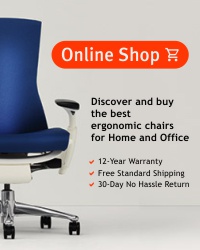