The Kinematics of Sitting

Ergonomic Criteria for the Design of the Aeron Chair

A chair should move the way the body moves. In the best of all possible worlds, the body is free to position itself spontaneously, constrained only by gravity. A person seated at work should be able to move freely and unselfconsciously from computer-related tasks to more relaxed or interactive postures. The work chair should follow along, providing optimal support whether the body is in motion or at rest.

People assume many different positions when they sit at work. Movement while seated is healthy. People rarely adjust their chairs.

People who sit at their work rarely sit still. Field studies of people working at VDTs (Grandjean et al., 1983; Grieco et al., 1986) found them assuming a wide variety of postures even while performing a single task. Our own research and observations of seated behavior in the office identified three distinct modes of sitting at work:

Experts agree that changing positions at work has important benefits for the sitter: Muscle movement serves as a pump to improve blood circulation (Schoberth, 1978), movement of the spine nourishes the intervertebral discs (Holm and Nachemson, 1983), reclining while seated pumps nutrients to the discs (Andersson, 1981), and continuous movement of joints is therapeutic for joints and ligaments (Reinecke, 1994). But if a chair requires its user to adjust it in order to shift into another position, it may have the effect of keeping the sitter undesirably still. Studies of people sitting at work indicate that they tend not to use manual adjustments on their chairs (Kleeman and Prunier, 1980; Stewart, 1980).

A good work chair allows a person to sit comfortably and properly supported in each of the three basic work postures and to move spontaneously between them while maintaining that comfort and support.

Support the lower back’s natural curve in all the sitting postures assumed at work without requiring the sitter to make conscious, active adjustments to the chair.

In the seated position, the body does not automatically adjust to achieve optimal spinal and pelvic alignment. The unsupported lower back tends either to straighten or to slump in an outward, kyphotic curve rather than the more healthful inward, lordotic curve it naturally assumes in a standing position (Andersson et al., 1979).

Studies of the seated body have shown that the position of the pelvis determines the shape of the spine (Schoberth, 1970), due to the relatively rigid connection between the sacrum (the base of the spine) and the pelvis. In a seated position, the pelvis tends to rotate backward, causing the lumbar spine to flatten or curve outward (Andersson et al., 1979). Providing support that stabilizes the pelvis to prevent backward rotation ensures a natural curve, whereas applying pressure to the lumbar spine does not (Kroemer, 1971; Grandjean, 1980; Zacharkow, 1988). A chair that provides support that nests the sacral-pelvic area as well as a deliberately placed target to engage the ischial tuberosities (sitting bones) creates a pocket that holds the pelvis in its natural position. / See Figure 1 / 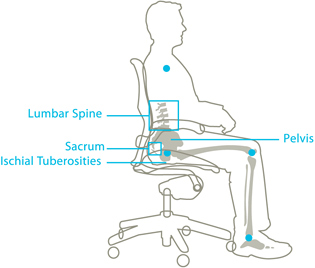 The design of the Aeron chair bypasses current mechanical models in favor of a tilt geometry based on human body linkages. Bill Stumpf’s research with Roger Kaufman at George Washington University identified the relationship of the body’s major pivot points as it moves between the three basic seated postures. If it were possible for the body to move from an upright seated position to a reclined position without the support or constraints of a chair, this is what it would look like: / See Figure 2 / 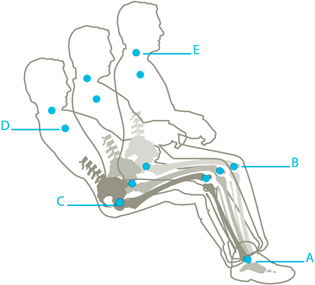 The linkages of the Aeron chair were designed to echo these body linkages in a movement that corresponds (coheres) to the natural movement (kinematics) of the human body. We call it the kinematic coherence model and refer to the mechanism as the Kinemat tilt. 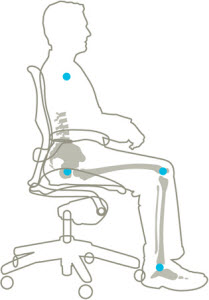 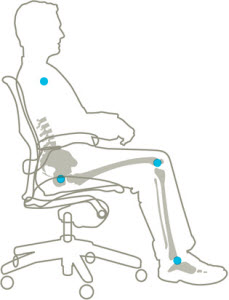 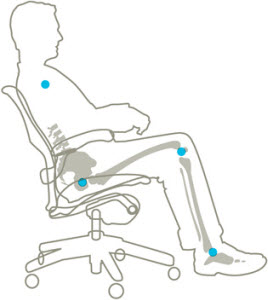 The Aeron chair supports the body’s natural linkages at all points, in all positions. As the sitter moves from upright to reclined, the feet are not lifted from the floor, as in column-tilt chairs; the back support does not lose contact with the sitter’s back, as it does in many synchronous tilt chairs; the arms do not slide back on the armrests, as they do in chairs that have armrests attached to the seat pan rather than the backrest. In the Aeron chair, the sitter pays no penalty—in terms of comfort, support, or effort expended—to achieve the benefits of seated movement.

Andersson et al. (1979), “The influence of backrest inclination and lumbar support on the lumbar lordosis in sitting,” Spine.

Holm and Nachemson (1983), “Variations in nutrition of the canine intervertebral disc induced by motion,” Spine.

Kleeman and Prunier (1980), “Evaluation of chairs used by air traffic controllers of the U.S. Federal Aviation Administration,” NATO Symposium on Anthropometry and Biomechanics: Theory and Application.

The Kinematics of Sitting